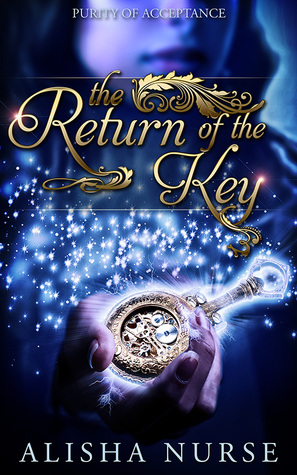 16 year old Eliza Aurelio grapples with her mixed race identity amid rising racial  tensions  on her little island. For their safety, Eliza’s grandfather sends her and  her grandmother to a  quiet town in Southwest England to stay with a relative.  But this otherwise quiet town has  been turned upside down by people  mysteriously disappearing. Eliza eventually  encounters a magical but dangerous  realm accessible through a doorway in the town, and  sees its connection to the  abductions. She intends to put things right, only wanting to  protect her family. To  do this, she must return a stolen key to lock the open doorway. But  Eliza has to  overcome her own inner conflicts if she is to stand any chance of being    successful and leaving the other realm alive.

Suspenseful and enchanting, The Return of the Key explores the power of love, sacrifice and the journey to self acceptance.

Does this book sound familiar? Well, yes it does, fellow reader. I’ve just had an author interview with her which can be found here. And I’ve just finished the book!

It was not what I was expecting (in a good way). I went into this book expecting YA fantasy, I did get YA fantasy but also got much more. The characters, the atmosphere and even the language itself is very different and unique. Eliza is a young girl who is looked down upon because of her mixed heritage – Afro Trinidadian and Indo Trinidadian which are two conflicting tribes. She experiences the understandable doubts of who she is and where she belongs. She is sent to England where she soon develops a strong friendship with a girl called Gwen and it is not long when that friendship whisks them off into an adventure in a magical realm where faeries live and a battle between good and evil continues. So now, I’m not going to spoil you any further significant events because that would rid you of all the fun!

What fascinated me the most about this book was the language. Its sophisticated but understandable, much similar to the language narrators use in fairy tales. It is almost exactly like that! It was refreshing since I’d never read a YA novel using this type of writing. Like all narration language, it was atmospheric and also allowed insight on not only one character but all characters. I admit, it took some time getting used to, having to shift my concentration from one character to another but I enjoyed it. This style gave me a Peter Pan/Lord of the Rings feel. At the beginning of both these movies, it starts with a narration that automatically sucks you into the story, this novel similarly did that throughout the whole book instead of the beginning. This feature is what made this book especially unique.

Eliza is a very complex character but she does experience character development. At the beginning she has enormous self-doubt which I found slightly annoying but once Gwen enters BOOM, everything happens. I absolutely love Gwen. She’s no doubt my favourite character. She’s kick-ass, brave, loyal and has a good sense of logic. And most importantly, she is neither annoying nor frustrating. Thumbs up for her! I found her a much more interesting character than Eliza because to me she had so much more depth and admirable qualities. Her mum is fae and her dad is human. That straightaway gives her a first class ticket to a tough childhood but that doesn’t stop her from being such an admirable character. There is not once in the book (except for the end but that has a good excuse) where she needed saving. She totally saves her’s and everyone else’s arse with awesome vine plant abilities every single time they hit trouble. On the other hand, Eliza just seemed useless during the fight scenes. Because she had no fighting abilities or powers, she was like a sitting duck during the majority of the action just watching her best friend save her butt.

I guess what let this book down was the relationship development. There needed to be much more development between Eliza and Gwen’s friendship and Eliza and Arden’s romance. Especially the romance. All I really got to see between Eliza and Arden was attraction (she blushes, he blushes, etc) and then Arden proclaiming his love at the end because he dreamed about her. In between that, I didn’t really get to see any interaction between them except for some eyeballing. That type of romances don’t work for me because there’s just too much insta-love involved. “I loved you before I met you because I saw you in a dream” doesn’t appeal to my mushy side.

It was the same with Gwen and Eliza’s friendship. I understood the strong bond they had but there wasn’t enough scenes which developed their relationship. Once minute, they’re meeting each other and laughing and the next, Gwen’s telling her all her secrets about her fae background. I just need to see more development in that.

In conclusion, this was a short and unique read. If you like fairy tales and fantasy, this is a great read. It’s short but it’s only by the last page, do you begin to realise how much you’ve attached to the story and characters.

Disclaimer: My reviews are completely honest no matter is the book has been provided by a publisher, author or purely bought.

3 thoughts on “BOOK REVIEW: The Return of the Key by Alisha Nurse”